So, even though we don’t officially get the keys until the end of this week – we went to our new house yesterday and spent the day in the garden. We got access through our friends yard who live next door – and we spent the hours happilly weeding and generally sorting, listening to the array of birds nearby.

There is a small disused section that runs down the side of the garden room that we transformed from a previous dumping ground into an area of paving blocks and yorkshire loose stone. It looks so much different, and I would have normally collaged you a before and after shot, but sadly I forgot to take the ‘before’ picture!

Yesterday, through a friends van, we also had our mangle, chimney pot and garden statues moved and delivered – and they are now in situe, pride of place, on our new patio area.  I’ve still got to make the planters up yet – but will do that once we are ‘in’. The weather yesterday was so windy that a constant barrage of leaves fell from the trees – so much so, that we eventually gave up trying to pick them all up!

We also made a lovely trip to our ‘new local’ garden centre and bought some plants and a beautiful hanging basket for the front. Want to see? The garden is still very much a work in progress, but a definite start has been made at least! 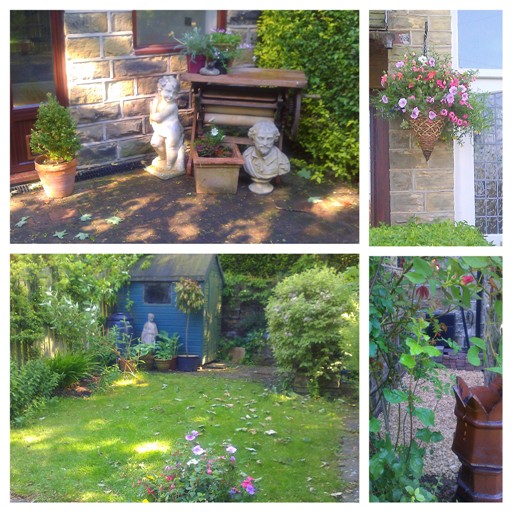 We measured the side of the garden room (from the outside) and were pleased to find that a Laura Ashley sofa we have our eye on, will indeed fit no problem – so that is also now on order. How exciting! It’s our major house-warming treat to ourselves – and at half price in the sale, was a real bargain!! It will be perfect for those summer evenings and wintry nights snuggled up overlooking the garden. 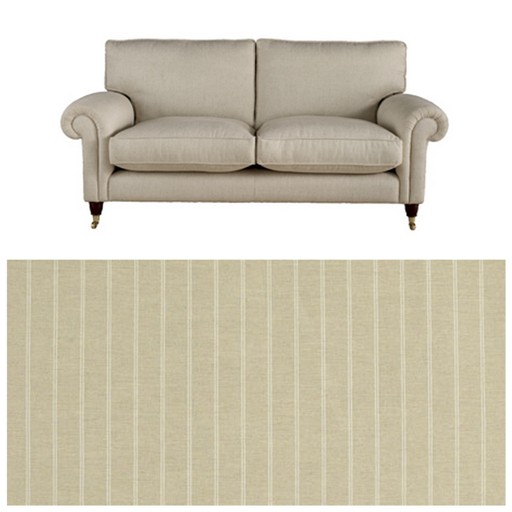 We enjoyed ourselves so much that we didn’t want to return home to our present flat of boxes and much needed packing! Oh well – countdown now to the real thing…

Well…it’s official…we have the house!! …and so, I’m also now officially allowed to smile from ear to ear and jump up and down too ;-)

The photos are already here of the house we’re going to be renting – so I thought I’d post the floor plans instead…as something about diagrams and dimensions make me even more excited! 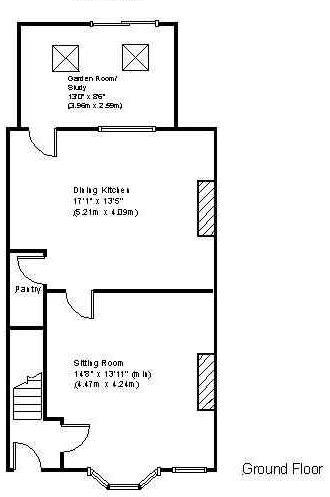 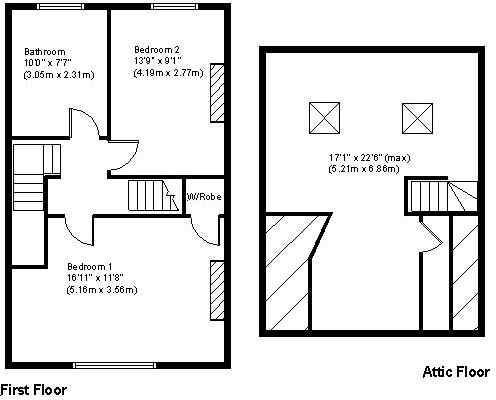 As you can see, a decent size for a mid-terraced house – and plenty of room for all of our belongings. I’ve already found, in my head, a place for the piano, grandfather clock and most of the other furniture – although there are still a few other things that we will need to buy to make this new house a true home. But they will come – in time and with funds allowing.

Already I have won a few new items for the garden from eBay – want to see? I won an old chimney pot for 99p, which is currently situated ready for pick-up literally a couple of miles from where I live now – it is a little damaged, but with a basket sat in the top full of trailing fuschias, no one will be any the wiser! Plus, I have also won 2 each of both of these circular planters and 4 of the Roman-esque rectangular planters. They are very heavy and will look absolutely beautiful full of lobelia, osteospermums, begonias and geraniums…to name but a few plants I have in mind for them! I can’t wait to get started! 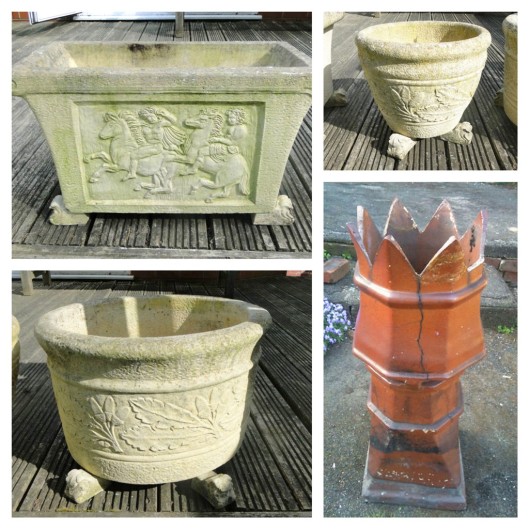 So there we have it! Thanks all so much for your advice and comments over the last 6 months regarding house hunting, but more importantly…your patience.

So what’s been happening?

Well firstly, I put an offer into the estate agents for the rent of the most recent house we like (if you haven’t already seen the piccies then you can check them out on the A ROYAL HOUSE post). But, more importantly – it has been accepted! So, currently we are parting with large sums of money, being referenced and credit checked and then, if all goes well, the house is definitely ours…for the forseeable future at least! I am very very VERY excited but am trying to keep it controlled – for the simple reason that nothing has been signed as yet – and I guess things could potentially change!

I pay my rent and all of my bills on time – and I am who I have said I am…honestly – so I’m not really envisaging any problem. Also, my friend and [soon to be] next door neighbour has spoken to the landlady about us – and after such a glowing reference she is very keen to have us as her tenants! However, the house is still listed on the various websites as ‘available’ …but realistically, the landlady has already said that she has accepted our offer so I’m not quite sure if anyone is able to gazzump us or not!? I’m going to say NOT – and just not think about it!

We’ve already spoken about decorating and possible moving dates – but until everything is officially passed, we are unable to confirm or finalise arrangements – or even celebrate! Remember – we STILL have that bottle of champagne on ice! Despite being all up in the air, I’m still VERY excited – and am currently watching loads of garden things on eBay! I can’t believe we’re going to have a garden area of our own!

Fates a funny thing. If we hadn’t have gone out for a drink with our friends a few weeks ago – they might never have told us about the house next door to them for rent – and I might not be writing this post now!

Saturday was also Eurovision – and so we had our usual annual little soiree complete with song compilations, scoresheets, friends, food and sparkling vino (sadly no Bucks Fizz!) I thoroughly enjoyed the competition and its songs – despite the usual tactical voting and unworthy winner. Don’t get me wrong, I did like the winning song this year [by Azerbaijan] – but not quite enough for it to come out tops. I wanted either Italy, Ireland or (obviously) the UK to win. Our entry finished a disappointing 11th – although this was much better than the majority of our last decade’s results where we have come last 3 times now – so we really can’t complain! Germany put on a fantastic show – the venue and stage was stunning with wonderful pyrotechnics, computer generated backdrops and stunning imagery. I look forward to the show next year in Baku.

The following morning we had to get up early as my beau was running the Great Manchester Run for cancer research charities. He finished the 10 kilometre circuit in 1 hour and 2 minutes – which he was very proud of (especially for his first marathon and lack of recent training). I was also very proud of him and the money that he raised for such a fantastic cause. Various friends were also running – so it was great to meet up with them afterwards too for a much deserved beer! Wanna see a few pictures of the day? 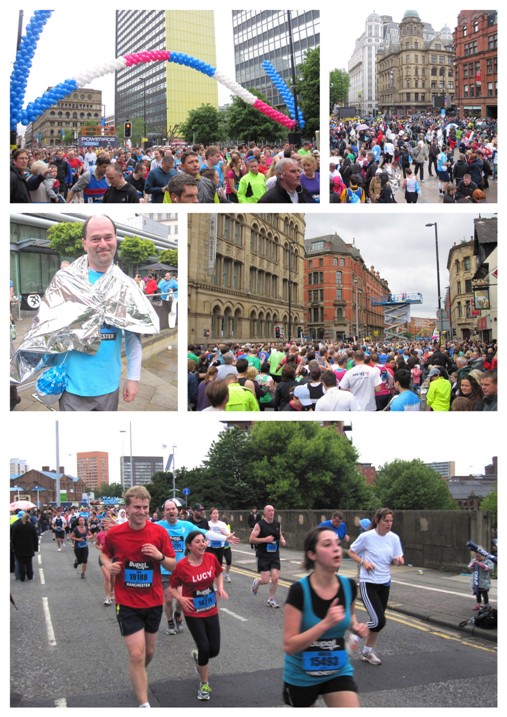 I’ll keep you updated on the house – plus I have some NEW pics of Ben (the puppy dog) to share ;-) 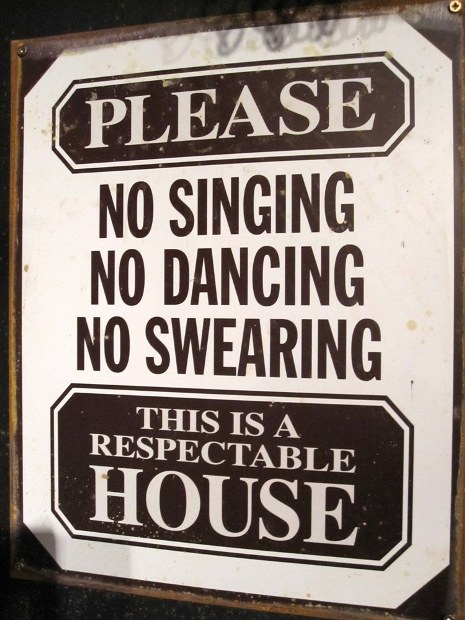 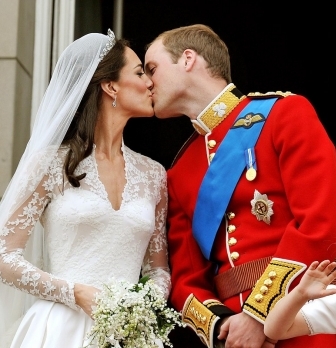 The last few weeks have been very busy ones. It’s included Easter holidays from work where I’ve been home at my parents for quite a few days with my beau to help them in the garden. The holidays have also included a royal wedding soiree at my in-laws house in celebration of the marriage of Prince William and his bride Catherine Middleton – (I’m such a sucker for pomp and circumstance) as well as the continuation of our own house-hunting. We’ve been to see several different property’s, which, for whatever reason, have not felt or been right (I won’t bore you today with pictures of those!)

However, last week we found one property which has interested both of us enough to seriously consider whether we could make it our home for the forseeable future. Want to see it? 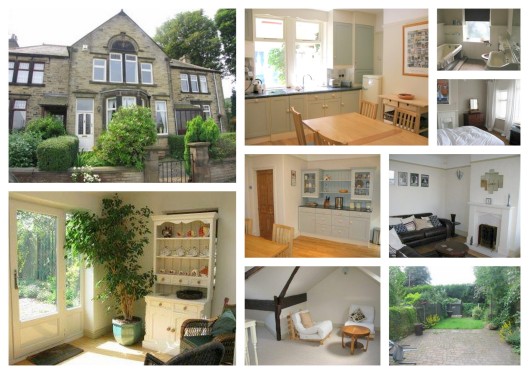 Ironically, we’re old friends with the next door neighbour and her partner which would also be convenient for cat-sitting duties and social evenings. We love the fact that the property has a garden – something slightly bigger would have been nice – but the mixture of garden / lawn and patio area is perfect for us at this stage. I also really love the garden room complete with french doors and velux windows which has been built on to the back of the house. Full of light (and complete with radiator for those wintry nights) I can imagine (if we were to take it) spending a lot of time in there!

Our friends know the landlady and so have given us a glowing reference and hinted at asking for a reduction in rent – although sadly at this moment in time she is in Europe and the property is being fully managed by a local estate agent – so who knows if this will happen! I do believe that for a mid-terraced house, the rent is currently over-priced – especially as we are able to rent a semi or even detached house for not very much more money. Watch this space for more information and news!

UPDATE 12.05: Have put an offer in on the house above – and my friend has spoken to the landlady – so, all we have to do now is wait!! Fingers crossed ;-)